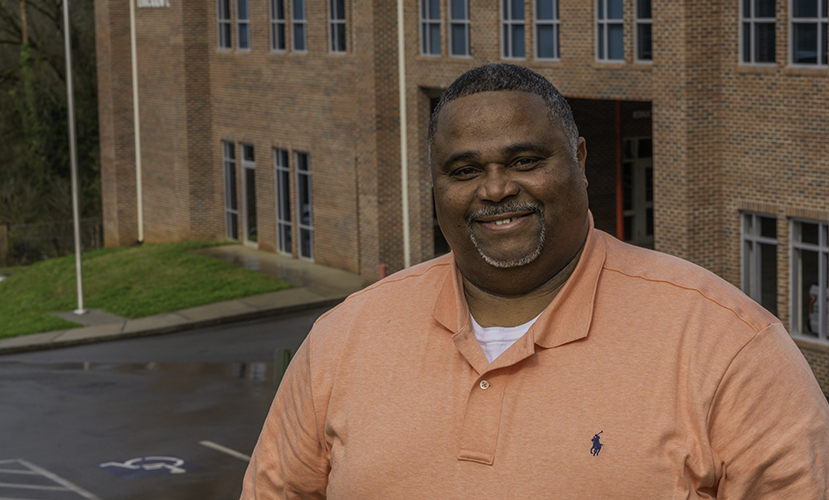 Tim Herrington grew up well-acquainted with Georgia Highlands College. His mother graduated from the college while it was known as Floyd Junior College, and his brother and sister later earned degrees from Floyd College.

However, college was far from Tim’s mind in his younger days.

“When I was younger, I dreamed of being a professional football player,” Tim said. “I was really enthusiastic and dedicated to achieving this goal until reality forced me to look at the number of young men worldwide that also had that same dream and only a very small percentage actually achieve the distinction.”

Realizing he needed to become more responsible and self-reliant, Tim enlisted in the military.

“I joined the Army, and for the next seven years I focused on that,” Tim said.

After being honorably discharged, Tim returned to Floyd County where he started a career with Floyd County’s government.

His dedication to public service coupled with skills developed in the military led to a full-time career with Floyd County Emergency Management, with Tim eventually being named director of the department in 2014.

“My favorite part is the community events that we participate in, which vary from the Wings Over North Georgia Air Show, balloon festivals, fireworks, Christmas parade, and summer camp programs,” Tim said. “These events afford me the opportunity to meet and interact with the community and share preparedness information, and ensure the community is prepared for emergencies that could affect our area.”

After nearly 30 years of being out of school, Tim was able to follow in his family’s footsteps of attending Georgia Highlands College, with the help of a scholarship from the Community Criminal Justice Foundation.

“GHC made it financially possible to go to college and make that transition after being out of school for almost thirty years,” he said. “It has given me the opportunity to demonstrate and lead by example and show the importance of education regardless of age.”

Tim earned his associate degree from GHC in 2016, but he doesn’t plan to stop there.

“GHC rekindled my desire to push myself and continue to explore my options in education,” Tim said. “I have since enrolled in the bachelor’s program for emergency management at Jacksonville State University.”

As an emergency response director, Tim has experience regarding preparation for situations such as COVID-19.

As time passed, Tim said, planning for a pandemic was set aside as the department, and nation, dealt with other issues.

“Once we started seeing what was going on in China, then we kind of started to have to pull out the plan and dust it off,” Tim said. “The issue we’re having is a lot of the planning that we had for H1N1 virus and for Ebola, the plans generally incorporated some sort of vaccine being available. With COVID-19 we haven’t developed a successful vaccine yet that we’re able to release to everyone, so that’s been a struggle for us.”

Tim said he has witnessed goodwill during this time as local communities have come together to face the threats associated with COVID-19.

“Fortunately, we have had a lot of folks within the community to step up and donate several items,” Tim said. “I’ve had a lot of people call, email, or text me messages and tell me about different contacts they have that we’re able to access and try to acquire those resources as well. I get emails from other states, people who have businesses who have stopped manufacturing what they normally do and send out equipment to us just wanting to help.”

As everyone works toward the eventual reopening of business, schools, and governmental services, Tim said the key is to continue doing what has been proven to work.

“The main thing is to help get the word out and tell people social distancing is working,” Tim said. “I know it feels like you’ve been cooped up, especially with the kids. I have grandkids and they want to see their friends and they want to go and play and go to birthday parties and all that, and at some point when this is all over we hope that we’ll be able to go back to all that. But for right now, we just need to keep encouraging everyone to keep doing what we’re doing. It’s working, and at some point we’ll going to get through this thing.”