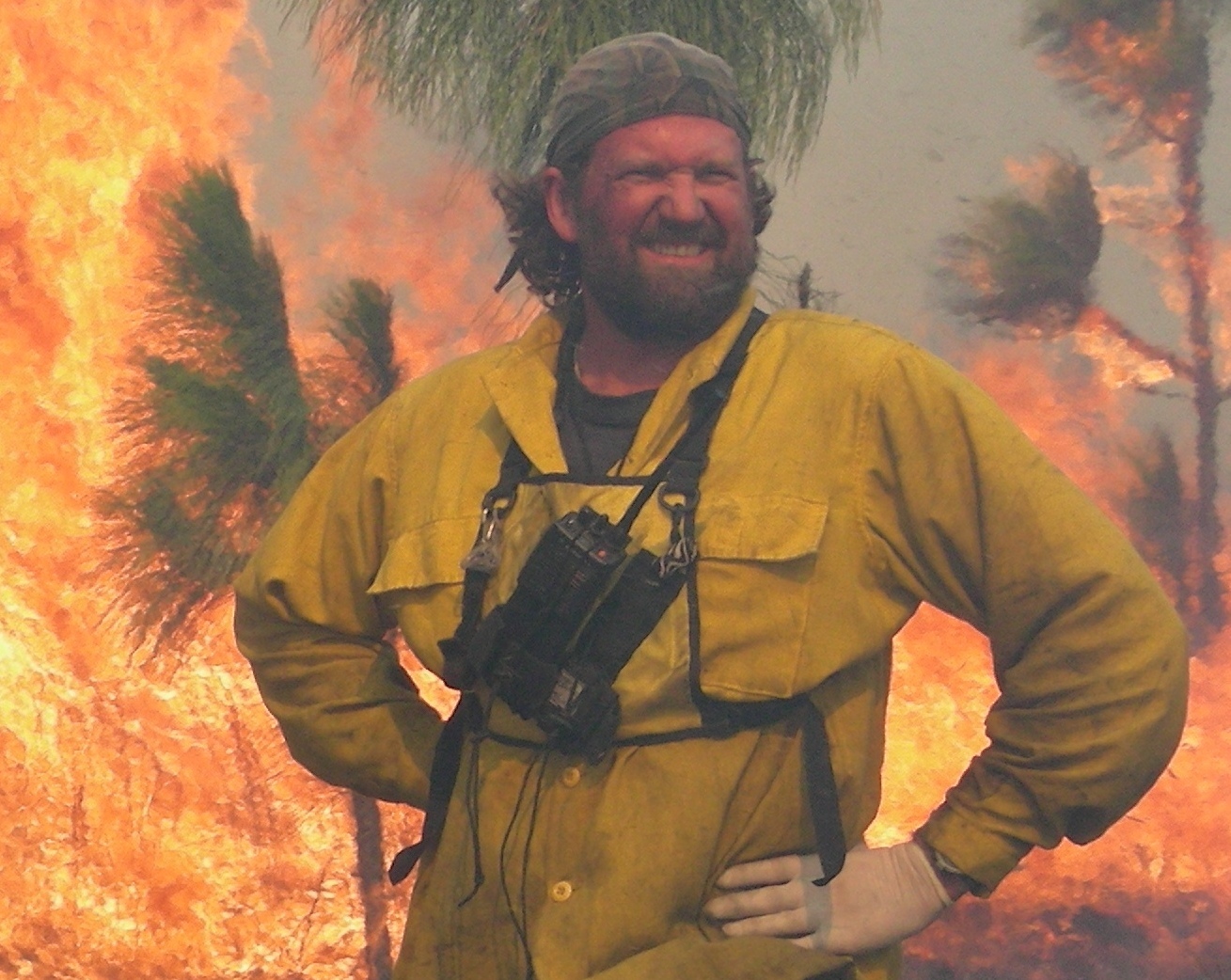 A raging fire blazes across a field, crackling and popping and blackening the bark on tree trunks as it passes, leaving a wake of scorched, ashy earth behind. Plumes of dark smoke as thick as rain clouds billow and expand into the sky. And at the start of this fiery force of nature is a man in yellow with a flaming torch.

That man is Johnny Stowe.

The fire may seem destructive, at first, but performing regular prescribed fires actually reduces the risk of wildfires by consuming fuels, and it restores biodiversity and ecosystems while helping restore nutrients to the ground.

Johnny can tell you all about it. He is a wildlife biologist, forester, and ecological philosopher among other things… but he likes to make it clear he’s also a “fire-loving country boy” from Cedartown.

“It’s in our heart. It’s in our core. It helps define who we are,” he said. “Who among us cannot remember a fire they looked into and just got lost and mesmerized in thought, who had inspiration for something that might not have come to them otherwise? It was while sitting in circles around fires that oral histories were first shared and became our earliest cultures.”

Thinking about prescribed fires through the lenses of science, history, and philosophy all together may seem different, but Johnny credits Georgia Highlands College for helping him take such a rounded, multicultural, and interdisciplinary approach to a career he has spent over 20 years of his life doing.

In 1988, Johnny decided to start his path toward a position with the South Carolina Department of Natural Resources by enrolling at Georgia Highlands College (then Floyd College). Johnny took classes on the Floyd Campus before transferring to the Warnell School of Forest Resources at the University of Georgia. He holds a master’s in wildlife ecology and management.

“The people at GHC provided me with knowledge and challenged me. They taught me how to think and learn and what my talents were and how to develop them,” he said. “GHC gave me invaluable experience and encouragement and made college immensely satisfying.”

Even after being away from GHC for so many years, Johnny recalls his professors, classes, and experience writing for the Six Mile Post with great clarity. The most salient in his mind include Professor Glenn Singleton’s economic classes, Professor David Cook in the science department, Professor Kristie Kemper for English and journalism, and Professor Philip Dillard’s world literature class.

“The professors at GHC were outstanding. They were always well-prepared and very good at conveying concepts and techniques and information,” he said. “It was clear—and I cannot overemphasize this–it was clear that they really cared about teaching me.”

After his time at GHC and UGA, Johnny eventually found himself as the Heritage Preserve Manager with the South Carolina Department of Natural Resources. And recently, Johnny was named to the board of directors of the International Association of Wildland Fire.

The International Association of Wildland Fire, based in Missoula, Montana, is an independent organization whose membership includes experts in all aspects of wildland fire.

Stowe is a S.C. Registered Forester and Certified Wildlife Biologist in SCDNR’s Pee Dee/Catawba Region. He has managed SCDNR heritage preserves with prescribed fire for 23 years. He represents the department on wildland fire management, policy, education and outreach issues, and he helped form the South Carolina Prescribed Fire Council.

Stowe lit his first fires 50 years ago on the family farm that he still burns today. His passions and energy center on the cultural and natural heritage of prescribed fire and its connection to human ecology, on putting good-fire on-the-ground to restore and maintain the integrity of imperiled ecosystems, and on engaging and mentoring the next generation of wildland fire leaders and managers.

“Modern fire science began in Southeastern North America and using controlled burning to reduce fuel loads and enhance public safety and to provide a wide range of ecological, economic, and cultural benefits, is a deeply rooted part of Southern history,” he said, “and it is more important now than ever. Anything I accomplish in my professional life, and so much of the fulfillment I have had in my personal life is directly due to my education at GHC.”