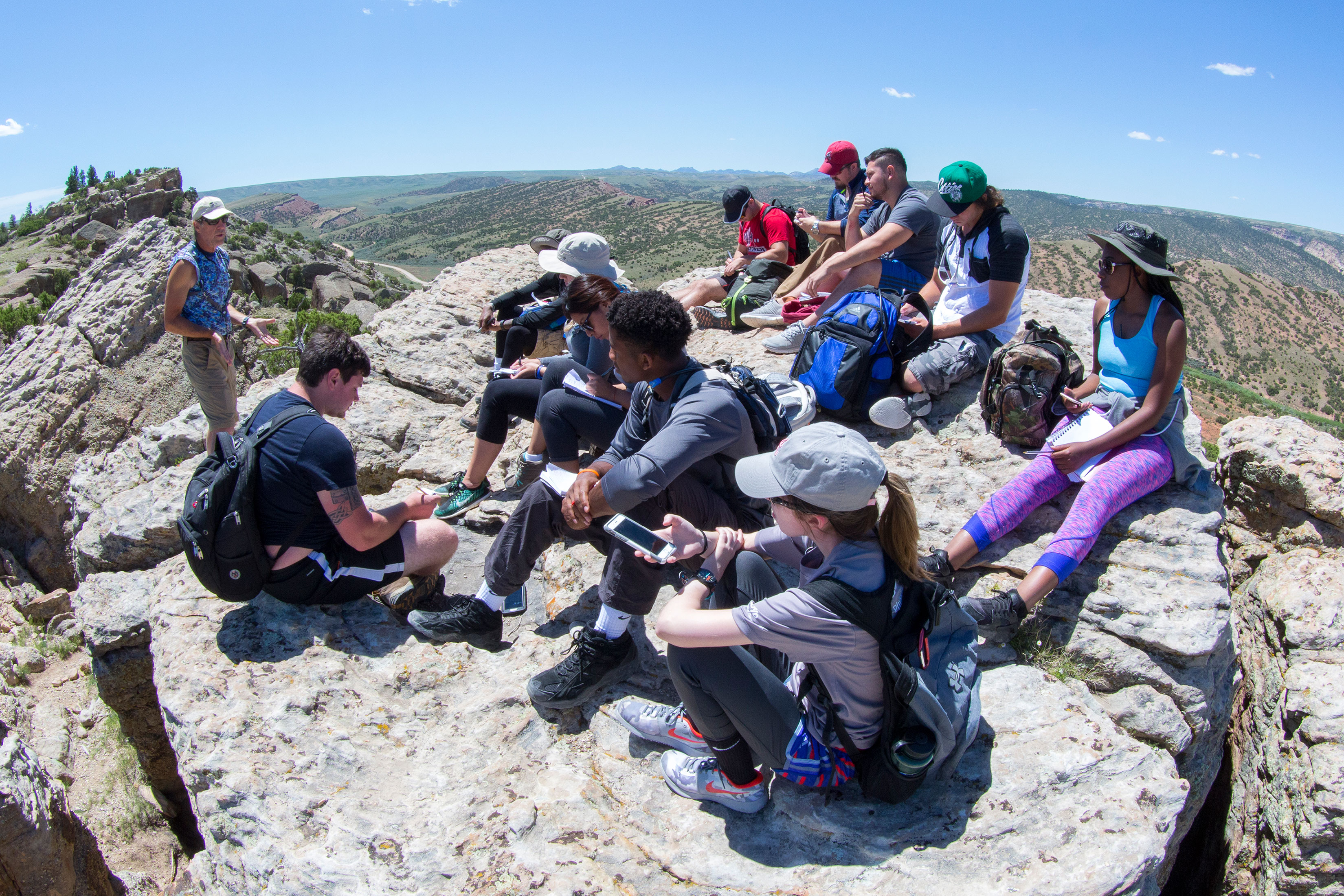 The classroom is a mountain. The whiteboard is miles of short-grass prairie land. The bookcases are snow-capped. And the textbooks are fossils.

The Georgia Highlands College summer field course trip to Wyoming in many ways is about moments that last forever in memory, in stone.

Associate Professor of Geology Billy Morris has been trekking across Wyoming with students for 20 years. The first trip was in 1997. He went to a conference in Seattle and met a geologist who helped him form the trip and serve as their guide.

“She was our guide for the first two years,” Morris said. “She was instrumental in setting us up. She was local. A lot of the places we go aren’t published anywhere, word of mouth kind of places, and they are these pristine, somewhat secret spots.”

Morris on average has taken 12 to 24 students each year since the program started. The trip starts at GHC two weeks before they head out, so students can learn what to expect, how to take notes in the field, and the basics of geology.

Then the real trip begins.

The group flies into Denver and then drives directly to the Front Range of the Rocky Mountains to visit Red Rocks Amphitheatre and the nearby Dinosaur Trail in the famous Morrison Formation. Then, they head north to Casper, followed by a day’s drive through Wind River Canyon and Thermopolis to Cody. After a night in Cody, they drive into Yellowstone and stay in cabins in a place called Canyon Village within walking distance of the Grand Canyon of the Yellowstone. They then work their way to Colter Bay Village before heading back to Denver.

He explained that Wyoming has good examples of all rock types, fossils, important surface processes and landforms, as well as every time period being represented.

And Morris said no two trips are the same.

“We’ve had three marriages that I know of that have come out of this trip,” he said. “Once, before we left, a young man asked me, ‘Are we going to go to any place that’s really pretty while we’re out there?’ and I said, ‘Well, as a matter of fact, a few.’”

The student went on to tell Morris that the reason he was asking was because he wanted to propose to his girlfriend, another student on the trip that year. So Morris helped the young man pick the best spot he could think of.

The group took a 7-mile hike to the top of Mount Washburn, which flanks an extinct volcano and is one of the higher elevations in Yellowstone.

“There is nothing higher than you as far as you can see. You have a 360-panaromic view,” Morris said. “He carried the ring in his hat band and when we got to the summit he proposed. She said yes.”

“Yellowstone is always fantastic. You never know what you’ll see there.” Morris added, recalling another trip when the group came across a standoff between wolves and a bear over a carcass. “The bear ended up back on his hind feet. We always see some incredible wildlife.”

But the moments captured in Wyoming aren’t always from this century...

“There is an outcrop that always gives me chill bumps every time I see it. It’s a piece of sandstone from the Jurassic period. It was formed on a beach. The sandstone that was deposited on that beach has ripple marks left behind, like a washboard. Clearly, it’s a wave zone, 30 feet high, 40 feet wide, but across the ripple marks are three-toed footprints, like a turkey footprint, but they’re from a pterodactyl. No doubt he was scavenging along the beach looking for squid or horseshoe crabs who had washed up in that spot...”

Morris stops there each year to show his students.

“To have a moment like that, an instant in time preserved, and to be able to show that and look at it and let your mind wander back that far and think about the changes that have gone on in that place, it’s one of those moments you lay awake at night and think about...”

Morris says he plans on continuing the trip for as long as he can. He credits the students as the ones who motivate him to go year after year.

“What really makes the trip for me is to watch the students and see how they react to what they are seeing and doing. It’s very satisfying to watch them learn and grow,” he said. “I love lectures and I love teaching in the laboratory, but where real earth science happens is outside. We can look at books. We can pull rocks off the shelf for an entire semester. But in a fraction of that time, you can do so much more when you’re in the right place. Bringing students to the right place and helping them understand how to read the rocks like a book is very satisfying.”

Sign up now for the 2018 GHC Summer Geology Field Class in Wyoming. Complete details can be found at: highlands.edu/wyoming