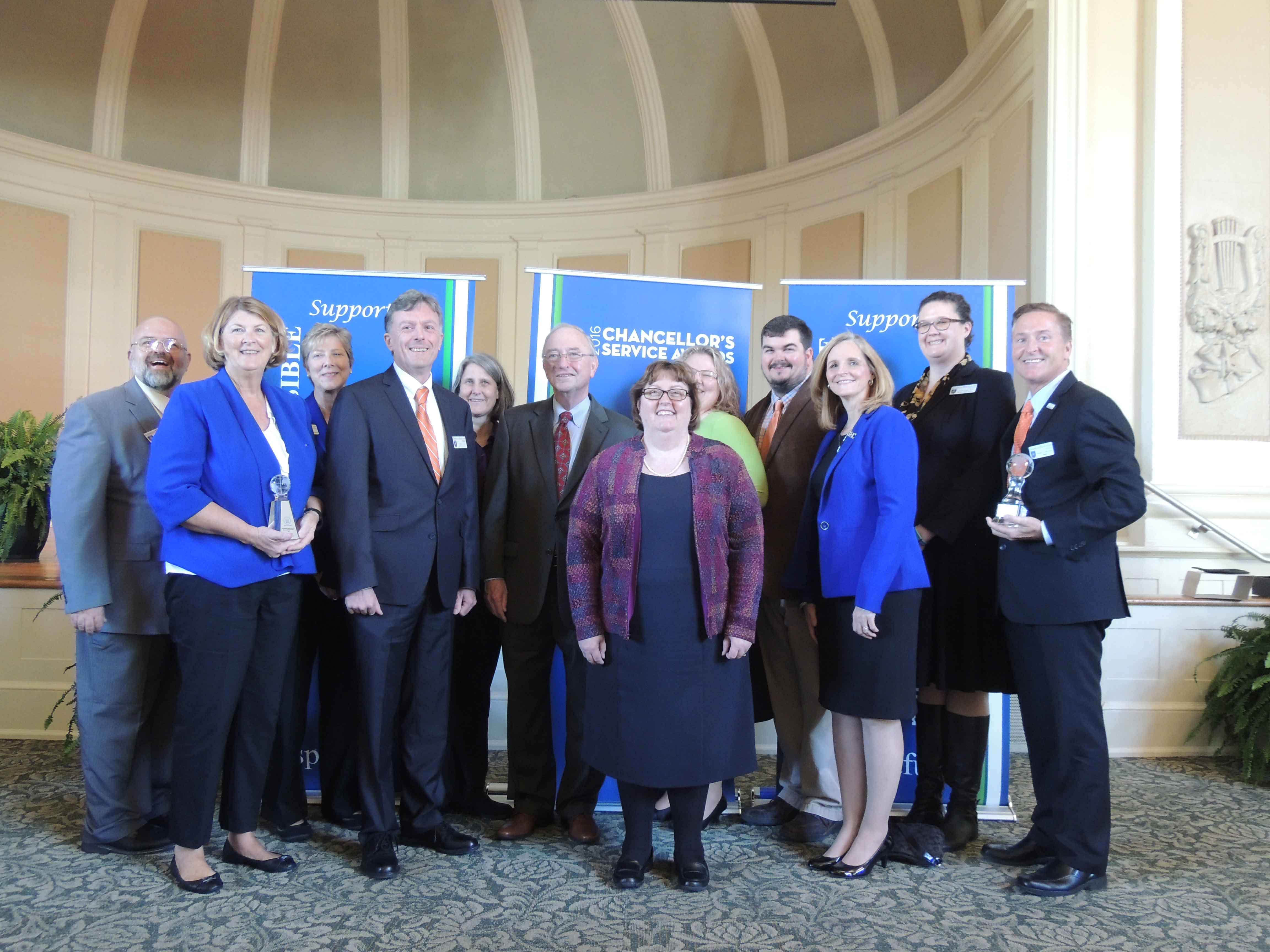 Georgia Highlands College brought home more awards collectively than any other institution in the University System of Georgia at the 2016 Chancellor’s Annual Service Excellence Awards at Georgia College in Milledgeville on Tuesday. GHC earned two Gold Awards, one Silver Award and a Bronze Award.

The Chancellor’s Service Excellence Awards recognize individuals, teams, leaders, ambassadors, process improvement projects, and institutions that have demonstrated outstanding, “above and beyond” service to the students, colleagues and other customers of the USG over the last year.

Among the 29 USG institutions, GHC received the following recognitions:

This award recognizes teams, departments or divisions that designed and implemented process improvements or initiatives over the last year that significantly increased effectiveness and efficiency. Projects were considered on the basis of improved service times, improved quality of service, and the significance of the positive impact on their customers (students, colleagues, community). Interim Dean of Libraries and College Testing Susan Vines accepted the award on behalf of the Library and College Testing.

In its nomination narrative, the Library and College Testing was touted for integrating COMPASS testing and re-testing; offering the SAT on campus for potential students in the Move on When Ready program; implementing an online scheduling system to manage the process for over 20 proctors across six campus locations; and much more.

This award recognizes teams, departments or divisions that designed and implemented process improvements or initiatives over the last year that significantly improved service to students. Projects were considered on the basis of improved service times, improved quality of service, and the significance of the positive impact on their customers (students, colleagues, community). Quality Matters Initiative Project Leader Katie Bridges accepted the award on behalf of the team.

This award recognizes administrator-level employees who, through their extraordinary leadership over the last year, demonstrated outstanding service to students, colleagues and other customers of the USG, and promoted a workforce culture that fosters “above and beyond” service experiences.

In the nomination narrative, Siler was touted for organizing a college Wellness Campaign; working as the co-chair for the system-wide HR conference; coordinating the first “Share Your Story” program with GHC students and employees promoting diversity and marketing efforts; and much more.

The college as a whole under President Don Green won the Silver Award for Outstanding Institution of the Year and President.

This award recognizes an institution and president that demonstrated the highest commitment and performance levels in service excellence across the institution over the last year, including “Best Practice” accomplishments and employee activities that foster service excellence. Consideration was based on participation in programs and initiatives that resulted in service excellence improvements; performance measurements (e.g. Key Performance Indicators-KPIs, customer satisfaction survey results, and achievements as reported in their Service Excellence Improvement Plans or other reports. Winners were selected based on seven attributes of service excellence: RESPECTFUL, ACCESSIBLE, INFORMED, SUPPORTIVE, CULTURE OF COLLABORATION OR TEAMWORK, HIGH MORALE OF EMPLOYEES, ORGANIZATIONAL PERFORMANCE.

In the nomination narrative, the college and President Green were touted for adding two new four-year programs; having continuous increases in enrollment; holding one of the highest retention rates in the state for colleges in its sector; being listed as the “best value” for a two-year degree in the state by a federal report; and more.