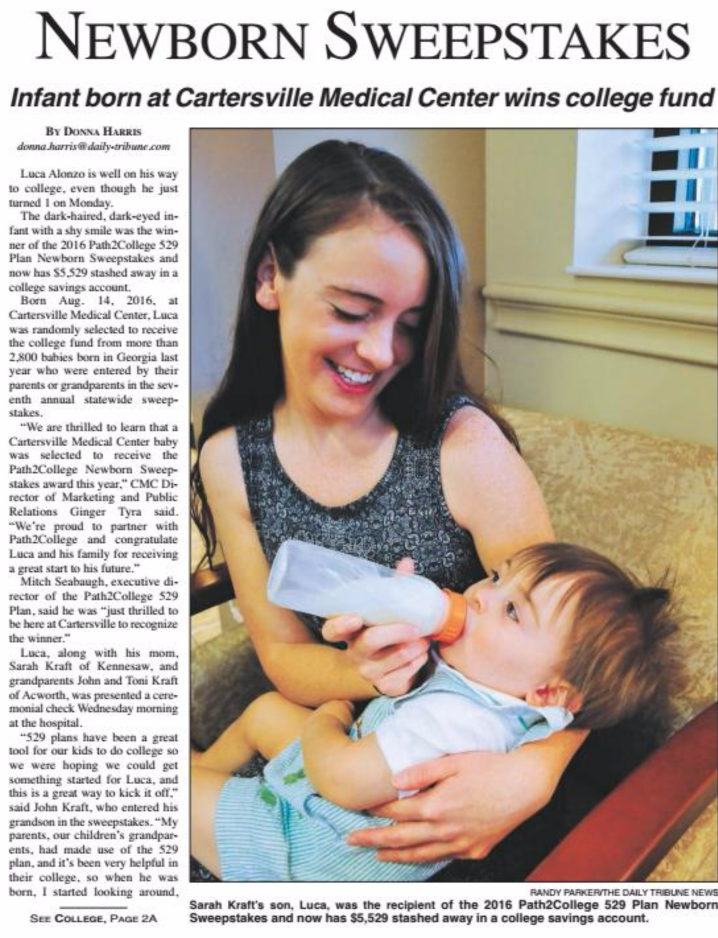 Luca Alonzo is well on his way to college, even though he just turned 1 on Monday.

The dark-haired, dark-eyed infant with a shy smile was the winner of the 2016 Path2College 529 Plan Newborn Sweepstakes and now has $5,529 stashed away in a college savings account.

Born Aug. 14, 2016, at Cartersville Medical Center, Luca was randomly selected to receive the college fund from more than 2,800 babies born in Georgia last year who were entered by their parents or grandparents in the seventh annual statewide sweepstakes.

“We are thrilled to learn that a Cartersville Medical Center baby was selected to receive the Path2College Newborn Sweepstakes award this year,” CMC Director of Marketing and Public Relations Ginger Tyra said. “We’re proud to partner with Path2College and congratulate Luca and his family for receiving a great start to his future.”

Mitch Seabaugh, executive director of the Path2College 529 Plan, said he was “just thrilled to be here at Cartersville to recognize the winner.”

Luca, along with his mom, Sarah Kraft of Kennesaw, and grandparents John and Toni Kraft of Acworth, was presented a ceremonial check Wednesday morning at the hospital.

“529 plans have been a great tool for our kids to do college so we were hoping we could get something started for Luca, and this is a great way to kick it off,” said John Kraft, who entered his grandson in the sweepstakes. “My parents, our children’s grandparents, had made use of the 529 plan, and it’s been very helpful in their college, so when he was born, I started looking around, doing some research, and saw the sweepstakes. Just kind of signed up just on a passing thought and very, very excited to have won.”

He also said he was surprised when he was notified a few months ago that his first grandchild had won.

“When you enter these things, you don’t really think you’re going to win, but every now and then when it works out, it’s just great,” he said. “We’re glad to give Luca a good head start on a college fund.”

Toni Kraft also was surprised because she didn’t know her husband had entered.

“Total surprise, and we were a little skeptical at first that it was real,” she said. “Just really thrilled. We never win anything.”

Asked if it was a relief knowing her grandson has some money put back for college already, she said, “yes, very much, because we’re still trying to put our own two [daughters] through.”

“We’re working on that, so it’s great to know he’s got a little padding there,” she said. “And now that we’ve got the account, we can tell other people, instead of buying toys [for gifts], they can just add a little bit to that.”

Sarah Kraft, 23, was excited to win a college fund for her son.

“I think it’s awesome because we didn’t have a big savings for him yet so we’re excited to get something started for him,” she said. “It’s a good first-birthday present.”

The Georgia Highlands College nursing major didn’t know her dad had entered the sweepstakes and wasn’t convinced they had won when he told her.

“Well, I didn’t believe him at first, but I was super-excited because I know that’s how we get a lot of our money for college,” she said. “I’m just excited about it.”

John Kraft said his family is divided between Georgia Tech and Georgia so Luca will be “getting lots of advice about potential schools over the years,” but Sarah Kraft said she doesn’t have a preference.

As part of the sweepstakes, the hospital also received a check for $1,529 that it can use in whatever way it sees fit.

“We have designated the Path2College 529 Plan award money to be used specifically for a future project or patient resources in our mother/baby department,” Tyra said.

Seabaugh said his job is to make parents, grandparents and guardians aware of the state-sponsored plan and to encourage them to start thinking about the future of the children in their lives.

“Our task is to try to raise awareness in the state of Georgia [that] you need to start saving for college,” he said. “One of the things we want to emphasize is that the earlier you start, that gives you the opportunity to be able to save money so that when they make the decision about where it is they want to go to school, then they will have had some money saved.”

“Studies have shown that children who have a college savings account are seven times more likely to actually go to college, so we feel like it’s very important that parents start saving,” Seabaugh said.

And it’s never too late to start.

“The thing we like to tell people is every dollar saved is one less dollar you’ve got to come up with in time to go to school or one less dollar in student debt,” Seabaugh said.

Luca is the first winner born at Cartersville Medical Center. Four of the past winners were born at Northside Hospital in Atlanta, and one was born at Doctors Hospital in Augusta.

On Jan. 1, the Path2College 529 Plan kicked off this year’s Newborn Sweepstakes.

Parents, grandparents and guardians of Georgia babies born in 2017 have until April 14, 2018, to enter the sweepstakes at www.Path2College529.com. Entrants must be legal residents of or taxpayers in Georgia and at least 18 years old.

Since the plan was established in 2002, more than $590 million has been withdrawn to pay for qualified higher education expenses for almost 36,000 students, and $2.3 billion has been invested to pay future education-related expenses, as of June 30, according to a press release.

“We want to continue to see these numbers rise, ensuring that more Georgia children have a solid financial plan to help them continue their education and achieve their dreams,” Seabaugh said.

AS SEEN IN THE DAILY TRIBUNE NEWS